Is a tomato a fruit or a vegetable? At last, we have the answer

There are some foodie questions that we feel may never really be resolved, such as “Is a hotdog a sandwich” or “Is soup a beverage or a food?”

At family gatherings or with friends, we debate these questions backwards and forwards, with perhaps the most energetically argued question being: Is a tomato a fruit or a vegetable?

On the vegetable side of the discussion, is the argument that tomatoes are savoury and eaten as we would eat other vegetables – either cooked in a stew or fresh in a salad. They argue that a tomato is often salted and spiced, much more in alignment with the category of vegetables. Would you ever snack on a tomato like you would a crisp apple? Would you slice a tomato over your cornflakes or add it to your fruit salad? No, you wouldn’t because a tomato is a vegetable.

The scientists in the debate will argue that the tomato is a fruit of a pollinated flower, that is fleshy and holds seeds from which the original plant can be propagated. Tomatoes are the same as many other fruit, such as watermelon, apples, guavas, grapes and even avocados in their basic structure. A vegetable is a different edible part of a plant – usually modified roots, stems or tubers such as potatoes, carrots or onions.  A tomato is none of these things and is clearly a fruit.

So which one is it? Is a tomato a fruit or a vegetable?

The answer to this nagging question was addressed this week on the hugely popular podcast, No such thing as a fish. In Episode 258 (42:30), co-host Anna Ptaszynski, tackles the question head on and reveals that the matter has been settled for quite some time now. For 126 years to be exact.

Anna says “I didn’t know about this lawsuit in the 19th century… so in 1893, where the Supreme Court (of the United States) got involved in whether a tomato is a fruit or a vegetable. (laughter) I had no idea they’d done this! “

Anna lays out the background of the case: “It was a lawsuit that was brought by the Nix family, who were big sellers of tomatoes and it was against this guy called Edward Hedden, and it was to recover some some fees they’d spent, some tax they’d paid on importing some tomatoes.”

“Because there was a rule that tax had to be paid on imported vegetables but not on fruit. And they were like, a tomato is technically a fruit so we shouldn’t have to pay tax on that.”

The supreme court justices poured over three different kinds of dictionaries and called two witnesses to try to determine which tax category to put the tomato in: fruit or vegetable.

Their final judgement in the case Nix v. Hedden, 149 U.S. 304 (1893) read: “Botanically speaking, tomatoes are the fruit of a vine, just as are cucumbers, squashes, beans, and peas. But in the common language of the people, whether sellers or consumers of provisions, all these are vegetables which are grown in kitchen gardens, and which, whether eaten cooked or raw, are, like potatoes, carrots, parsnips, turnips, beets, cauliflower, cabbage, celery, and lettuce, usually served at dinner in, with, or after the soup, fish, or meats which constitute the principal part of the repast, and not, like fruits generally, as dessert.”

At last, the court unanimously decided that for the terms of taxation and customs, a tomato is a vegetable. Despite being botanically a fruit in structure, a tomato is generally understood to be a vegetable and should therefore be taxed as a vegetable.

So, that’s that settled then. Tell us what you think on Twitter #teamfruit #teamvegetable. 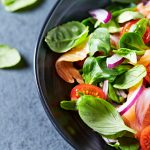 12 Delicious Vegetarian Salads That Will Actually Fill You UpBlog Potatoes 101: What you should know about the different varietiesBlog